by Pensa Int'l
in Church news
0

An impressive ceremony has been held at the Pentecost Convention Centre (PCC), Gomoa Fetteh to inaugurate Pentecost Students and Associates (PENSA) International, a union of all PENSA institutions across the globe.

The event, which took place on Tuesday, May 7, 2019, during the Heads’ Session of the 16thExtraordinary Council Meeting of The Church of Pentecost, was heralded by drama, choreography and musical performance.

Under the Vision 2023, PENSA, which operates under the Youth Ministry, shall be organised to have a worldwide focus of possessing the campuses and equipping them to be agents of transformation in the society.

Addressing the enthusiastic students and alumni, the Chairman of The Church of Pentecost, Apostle Eric Nyamekye, expressed his joy over the launch of the group, which he said was a dream come true.

“Today is one of the happiest day in my life. My heart and my spirit has longed to see a day like this when young people will gather in our midst and we will release them to possess the nations, because possessing the nations is not a thing for old people, it is for the young ones. We [adults] will dream dreams, but they [the youth] have to run with the vision,” he said.

Apostle Nyamekye praised the immediate-past Chairman of the Church, Apostle Prof. Opoku Onyinah, for raising what he termed as “an army of young people” for the past ten years, saying, “It is my duty to release them to change the world.”

According to the Chairman, taking nations is God’s agenda. He posited that Jesus is either the Lord of lords, the King of the nations, or He is not at all, for the Scripture says, “God so exalted Him to the highest level and gave Him a name that is above every name, that at the mention of His name every knee should bow, of things in heaven and everything on earth and things under the earth.

“The ending of the Lord’s Prayer says … ‘for Thine is the Kingdom, the Power and the Glory.’ The kingdom does not belong to the devil. So we shouldn’t possess part of the kingdom and let the devil also possess the other half. The kingdom does not belong to the devil so the devil shouldn’t be marching on the streets of our world glorifying himself and flexing his muscles in gayism and lesbianism and we sit and stare at him whilst the whole power that created the heaven and the earth resides in us. Why are we giving the devil the space?” he charged the youth.

“God is demanding a new order, a people with a certain kind of mentality- the Joshua generation mentality- a people who are ready to do what God has said He will do. 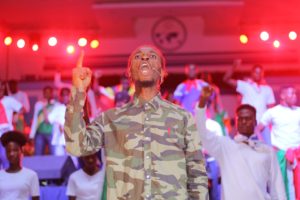 He stated that the Joshua generation did not care about the Anaks; they were a fearless generation, and had a pioneering spirit, and were also willing to do according to all that was written in the Scripture.

“When we talk about the church, we are talking about God’s militia, a people prepared to possess the nations. We need to change our mentality. We need to have the Joshua generation mentality; a people who will say that if God has said it, then He will do it,” he said, adding, “Let us not fear the Anaks on the mountains. If it pleases the Lord, He will give us the land. Let us put on our strength. Let us march up there to possess the nations, for God will give us the nations if we are willing.”

“Joshua’s generation possessed the land while the Anaks were there. Why didn’t Moses and his people enter into Canaan? It was because of their mentality. Same God is with us today. Hark the voice of Jesus crying – ‘who will go and work for me?’ Souls are ripe but the workers are few. People are dying. Soon you (the youth) will become like us and your time would have gone.